Doing part time work has never been a major concern for me, so I’ve often struggled with the luxury of zero responsibilities.

When I’m forced to work myself to the bone from 7am to midnight every day, I flourish. But give me the opportunity to regularly sleep past 9am, and I slowly tangle myself into a self-loathing mess of poor productivity.

I’m like a slinky climbing down the stairs: When there are evenly spaced steps in front of me, I can tackle them with ease. Hell – even if a couple of those steps are a little weathered or poorly constructed, I usually find a way to adjust. I expand and contract as necessary to keep progressing. 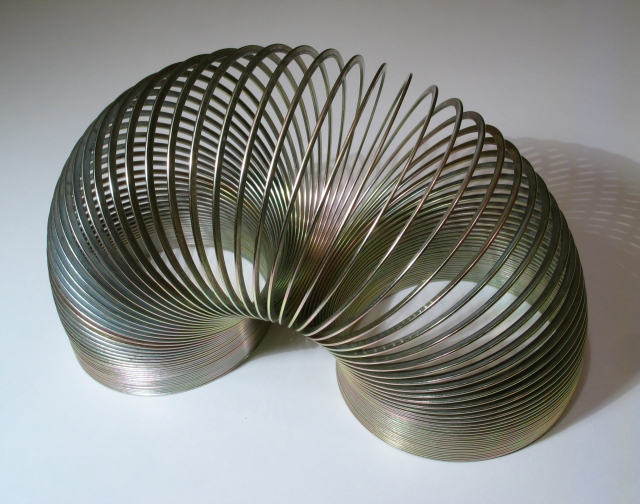 However, when there are no steps present at all, things never go smoothly. Ever tried dropping a slinky from a window a couple of stories high? The coils twist in and out of their original shape, tangling along the way until it finally hits the ground in a convoluted heap that’s barely salvageable.

On every vacation over the last few years that lasts more than a couple days, that free-falling slinky has been me. I’ve never been able to self-motivate myself, to place the steps in front of me without any outside intervention.

So this July, I’m going to do things a bit differently, though I’m a little ashamed to admit that it took the death of an amazing writer that I follow to inspire the change.

The death of Ryan Davis at 34(!) years of age has given my outlook a shake. He wasn’t a man that followed very closely, or even for very long. But by all accounts (including my own limited one) Davis was an exceptionally happy person that made everyone who knew him, or heard his jokes every week on Giant Bomb, happy as well.

The real kicker for me, is that Davis put smiles on people faces by doing what he loved, and by doing what I ostensibly hope to be doing in about four years from now: living and breathing video games with friends to make a living.

It really does sadden me to think that one of the first major proponents of the personality-filled games media world that I’ve come to love is no longer with us today. But in a kind of morbid, bittersweet attempt to try and mentally soften the blow, I’ve been thinking about Davis’ passing as a time of extended vacation for the man. However, then I think about my experiences with vacations, and it doesn’t really work out to be that much of a euphemism.

No matter how much fun he had, or how hard he worked to get to where he was, there are no more steps in front of the Ryan Davis’ slinky. He’s free-falling, and there’s no outside intervention that’s going to untangle him. His life has been cut short, and the only solace I can muster, is that at least his life was extremely well lived.

Over the last six years or so, I’ve worked fairly hard to realize my dream, but “fairly hard” just doesn’t really cut it.

So then what am I doing? I’m one of the many who, as Polygon’s Justin McElroy so aptly put it, “whether they realized it or not … kind of wanted to be Ryan Davis.” And over the last six years or so, I’ve worked fairly hard to realize my dream, but “fairly hard” doesn’t really cut it.

Sure I keep abreast of all the latest happenings on the beat that I want to make my own, but rarely do I independently produce content that will make future readers and employers think I’m the right man for the job. A single tweet that contains my opinions isn’t good enough. I must compose longer pieces of prose, try my hand a video content, and constantly seek feedback on my work.

And I’ve got to find it within me to do those things even when I’m on vacation. If the horrible possibility exist that life can end at 34, or even sooner, I don’t have room in my world for time off. I’ve got to make myself useful day-in and day-out.

Besides, I pretty sure people like Ryan Davis or even Matt Hughes (another games writer who committed suicide last year) will be taking a vacation long enough to make up for the rest of us.