To make a great adventure game in my eyes, you need two things: fantastic writing and and a beautiful setting.

I’ve played through and enjoyed games that lacked in other areas but had those two traits, and yesterday I played through a 15-minute demo of Supergiant Games’ Transistor. The game passed my preliminary requirements with flying colours – colours and shapes that constantly warped and animated around the games’ world.

As far as cyberpunk art goes, I don’t think I’ve ever seen anything as gorgeous as the city in Transistor. As the, already iconic, muted songstress moves around the streets lugging a giant sword along with her, electronic sparkles kick up behind her heels and dissipate into the air, perhaps intimidated by the much more impressive electrical functions of the rest of the environment.

As far as cyberpunk art goes, I don’t think I’ve ever seen anything as gorgeous as the city in Transistor

The walls of the futuristic buildings that line the streets of Red’s escape digitize back and forth as if the voxel bricks that hold the structures together are fighting again the only antagonist we currently know of in Transistor’s world: The Process.

Like the other machines in the environment – a digital weather kiosk for example, or even the doors and keypads – the enemy robots that Red encountered during my demo carried an air of beauty that you can only get from devices with perfectly machined-curvatures or exposed interface elements and sensors.

Rarely did these objects on screen stop moving around Red. Whether it was the murderous robotic pods dashing around the screen to get at her, or a pulse of light on a circuit beneath her feet that signified an electric current, the world looked great and it felt alive. And helping to bring the world to life in returning Supergiant fashion is emergent and omnipresent narrator.

From what I played, the narrators lines felt more scripted than in Bastion, but depending on my unique actions he would also follow along to an extent. It’s not a big change, and whether it’s intentional or not, differences in the narrative style are to be expected.

Rather than a narrator looking in on the scene as in Bastion, the narrator in this game is the Transistor itself, the sword that Red is going to have to share a symbiotic relationship with if she hopes to either escape her plight or strike back at her attackers.

Transistor looks to have the makings of a great adventure game – it’s universally beautiful and the prospect of the narrator promises some good writing-opportunities – but how does it play? 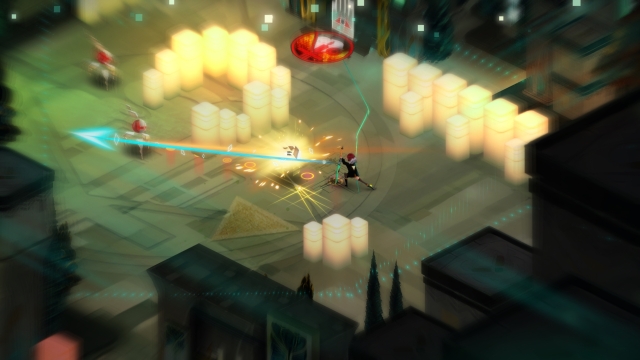 It plays best when controlled like a turn based action-game

Right now, Transistor plays at its best when controlled like a turn based action-game. The demo I played is presumably a slice of the very beginning of the game, and I did encounter an upgrade system that could offer significant changes to combat by powering up the Transistor’s abilities and maybe even those of Red. However, in the state that Red was in when I played her, she moved slowly in comparison to the speedy Process that were pursuing her.

Perhaps it’s because the diva is weighted down by the huge sword that’s almost as big as she is, and that would make sense from a story perspective, but from a gameplay perspective, it made performing combat actions in realtime a seemingly poor option to take. Instead, I relied on the Transistor’s time warping ability to quickly move into positions where I could deal damage to the process and the return myself to cover, all within a few time lapsed seconds.

This way of playing wasn’t unfun, I actually really like it because it allowed me to see the numbers behind my attacks and determine how healthy my targets would be after a ranged laser attack vs. a close quarters smash to the rear. However, it is very different from the realtime movement vs. damage philosophy that was in Bastion. Different, but pretty good.

From what I’ve played of Transistor, it hasn’t given me any reasons not to be super excited for its release in early 2014, and if Supergiant Games can iterate on the unique elements and changes that they’ve implemented thus far, I think they’ll likely have another gem on their hands for their sophomore effort.