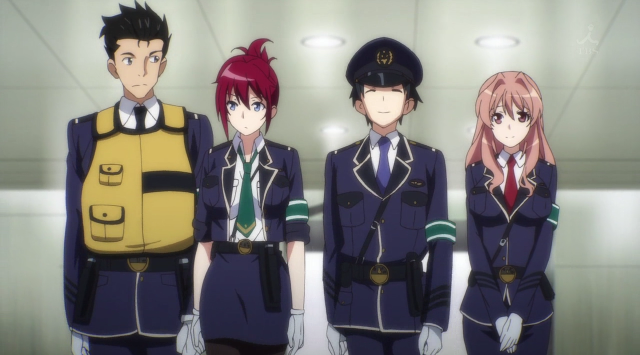 I’d be willing to let my brain regress several years in order to take on a child-like fascination with everything locomotive, but I’m not willing regress to a point where I tolerate forced dialogue and out-of-place slapstick sex jokes. Hell, trains are still cool no matter how old you are, while a flat protagonist’s inability to hold a believable conversation or steady a step ladder — and his miraculous ability to “catch” a woman by pinning her down and groping her breast — is not.

The first episode of Rail Wars! boils down to an extended training montage of high school students who want to work as safety officers for Japan’s national railway. They go for endurance runs, they practice apprehending purse snatchers, firing hand guns and even loading coal into traditional steam locomotives.

The rest of the show looks like it will feature four blasé characters once they’ve graduated to become certified rail workers, so it’s tough to gauge how well the story will pan out based on the awkward first episode, but for viewers who value their time, Rail Wars! does nothing to make it seem worth sticking around to find out.

Check out this header post for more Summer 2014 anime previews and for more on why I’m taking a stab at them in the first place.