The juxtaposition Miss Kobayashi’s Dragon Maid presents is a laugh out loud hilarious one that balances on sturdy character-building pillars in its premiere.

Kobayashi is an experienced programmer who turns into an otaku obsessed with maids when she’s had too much to drink. In a drunken trip home from work one night, she runs into the dragon, Tohru and apparently invites her to live as a maid in her apartment. 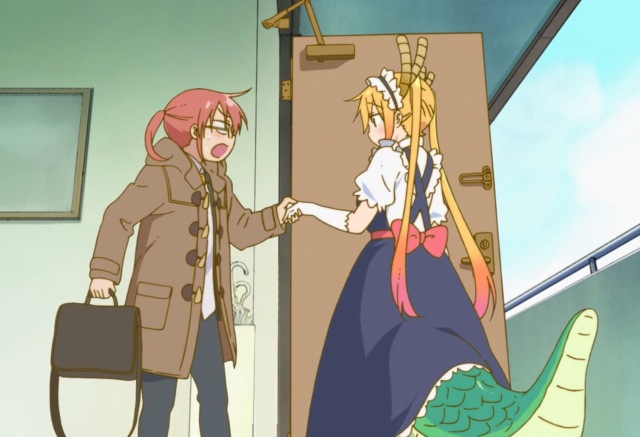 Tohru flies over the city in her monstrous dragon form to Kobayashi’s door the next morning and casts a spell on herself to transform into a pigtailed body of a woman with antlers and a lingering reptilian tail. Her scales transform into a maid uniform too. As Kobayashi debates keeping the drunk promise she maid to Tohru the night before, the power dynamic between the two is established with plenty of jokes peppered into the dialogue.

Kobayashi’s more at home with DRAKON than dragons

The dragon maid loves Kobayashi for reaching out to her, and is set on behaving up to her standards. A feeling-out scene where Kobayashi tries to figure out how effective Tohru will be as a maid by quizzing her knowledge shows off Tohru’s archaic, bizarre and sometimes violent tendencies. But here and at other points of the episode, a stern word from Kobayashi keeps the dragon in line.

You can’t find these original jokes in another story, which is the biggest strength of Miss Kobayashi’s Dragon Maid. It’s repertoire of jokes are funny and believable within the scope of the characters it introduces to us. Anthropomorphic girls aren’t anything new to anime, but this debut departs from the ensemble style of recent shows to create an interesting focus on the interaction between the bizarre, yet normalized Tohru and the everyday normal of Kobayashi.

Instead of ‘the girls are the guns’ as in Upotte!!, or the girls are the battle ships as in Arpeggio of Blue Steel or Kantai Collection, Kobayashi’s Dragon Maid eschews dramatic aspirations with a novel quirk in favour of stellar jokes built from the wholly unique aspects of its individuals. Instead of ‘let’s save the world with an anthropomorphized army,’ it’s ‘how can I stop this dragon from licking my cloths to get them clean?’

That’s the promise that this premiere delivers, at least. Its hints at future characters suggest it might lead down a more dramatic path, and that would probably even be to its benefit, but I doubt such a shift would minimize the importance of these individual characters in favour of a significantly bigger conflict. 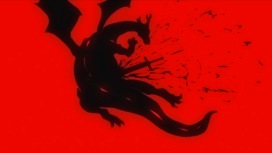 Whatever Tohru’s life was up to this point, she’s chosen to live a domestic life right now. A closing nightmare sequence of Tohru, depicted in striking three-tone black, red and white, shows her fighting off humans and a massive Roman-looking god that hurls an equally huge sword through her body. When she starts awake next to Kobayshi, the two share a frank and empathetic conversation about the incident — Kobayshi checks to see if she’s ok, without probing too deep into the past, and then the two sleep easy as the credits roll. 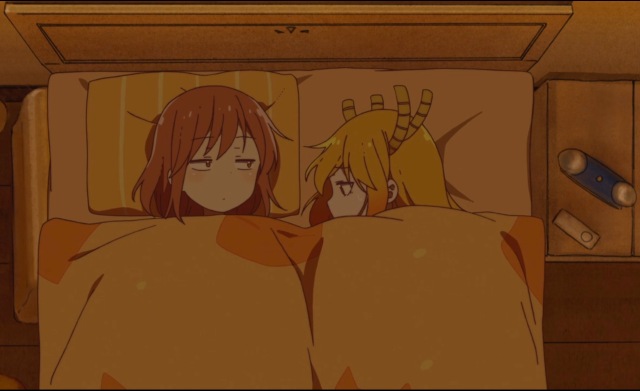 It’s a super promising introduction to the show’s characters with enough foreshadowing to promise a future payoff beyond its jokes. Miss Kobayashi’s Dragon Maid is definitely worth checking out.

You can find it streaming on Crunchyroll. Funimation will also stream an English dubbed version of the show beginning on Feb. 1 at 10 p.m. ET.