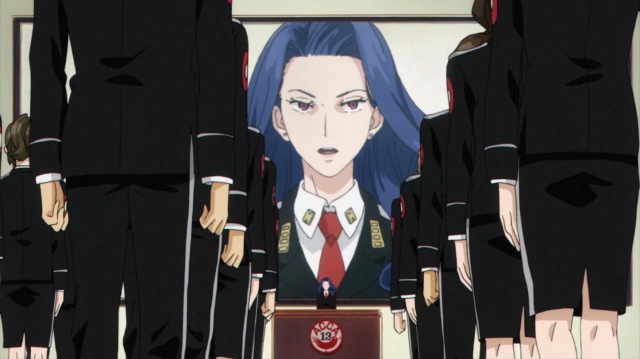 This week on ACCA: 13-Territory Inspection Department (ACCA: 13-ku Kansatsu-ka) we learn how Jean became an orphan. His parents died in an train crash along with 63 others travelling between Peshi and Rokkusu. The character interactions that follow fundamentally shift the suspicions that have been hinted at throughout the show.

Grossular was once a chief officer for Rokkusu before he was promoted, and after the accident, he proposed the national railway be regulated by ACCA to prevent future tragedies. There isn’t much more to the flashback other than showing us an early meeting between Jean and Grossular, but the knowledge of a state-regulated transportation body is surfaced with more organic exposition here than in previous episodes. This bit of information could be key, but the star of this episode the character developments.

ACCA continues to change the dynamic between existing relationships in incremental ways, but the shifts are substantial. Often, it’s only one or two lines of dialogue that comprise each change, but those choice pieces of dialogue combine with small actions to keep the viewer interested while deepening our understanding of the emotional networks in show.

In a short cutaway where Jean is recounting the planning process with his sister to organize a New Years party, they’re conversing while moving around their home, and Lotta chides Jean into taking his cigarette outside. She notices him put a cigarette in his mouth even though her back is turned, and she never sees him raise the tobacco to his lips.

These little touches show how well they know each other, and similar interactions have always been occurring between the rest of the cast. In this way, Lotta is is a fun distraction from the more serious character interactions.

“The citizens lives are being improved in visible ways, so from now on ACCA will become more popular,” Lotta says. She continues to stand as a barometer for naive normalcy in ACCA, always flitting about in a carefree manner only matched by some of Jean’s subordinates.

ACCA chooses what it wants to show and hide

These character examples layer on top of each other as ACCA’s season progresses, and the result is a concrete understanding for the audience of the familiarity between characters when ACCA wants to show it to us, and a vague sense of suspicion when it the show intentionally hides these details.

The pitch and catch between its characters is an explicit form of read and react that’s fun to watch, but even more so if your mind is keeping up with what the audience is expected to know, and not know. 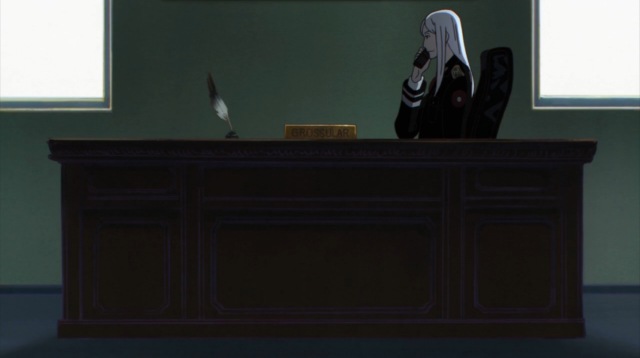 As grossular mulls over the frustration of having the spy he set on Jean outed, he immediately strides over to Lilium to confront him. The only way he could know the identity of the mole is if he knew how they think from working with them for years. It’s an accomplishment of the show’s structure that lets us understand by showing rather than telling. It makes us think about how complex the relationships are, and the mystery is filled in as we let out minds do most of the work.

Another example of a character shift built up over the course of the episode is a fairly significant and warranted change that’s explicitly shown by Mauve towards Jean.

“You are less useful than I thought,” says Mauve

He reports to her at the bakery that there’s no news of a coup, but her own informants tell her about the kerfuffle in Suitsu, leaving her to mistrust Jean’s loyalty to her. That loyalty would undoubtedly be valuable because she herself was ordered off of the investigation, which is why she asked for Jean’s help in the first place.

The romantic undertones that were presented between the pair add another level of intrigue to their relationship, but not so much that we feel bad for Jean when he’s dismissed by Mauve at the bakery, and then stood-up when he tries to make good with some new, but minimal, information he collected. Mauve’s interest was probably professional the entire time. Her agency decorations don’t lend themselves to a military personality that’s easily swayed by infatuation.

“You are less useful than I thought,” she says as she literally turns her back on Jean and walks away.

For Jean’s part though, the way that he goes about collecting information from the Hare district ACCA workers is telling. ACCA continues building on its strong environmental scene setting in these cuts, with the agents wearing swim trunks and agency branded T-shirts. Even the ceiling fans in Hare are made from what looks like stiffened palm tree leaves.

Jean’s behaviour this episode quiets the most obvious suspicion that he’s the one facilitating the coup thanks to his position as a frequently traveling intermediary between all the districts. His inner monologues make it seem like he really has no part in the scheme — if it exist — and he outwardly says as much to Grossular during a chance meeting in Rokkusu.

This disinterest makes Jean an enigma whose motivations are even more interesting to think about than before, now that the most logical cause for suspicion, based on what we know, is much less likely to hold water.

From my perspective the suspicion shifts towards Mauve this week. Her continued interest in the possibility of the coup, much like Jean’s in the past, is curious. This episode goes out of its way to show Jean as a social, indifferent worker at his new years party, and Mauve as the isolated thinker alone in her apartment during the holiday.

A little bit of background on her history dug up by Jean, and her focus on investigating her home-district, Kororē, this episode further shift the the suspicion onto her, which can only mean we’ve got more fun to look forward to next week.