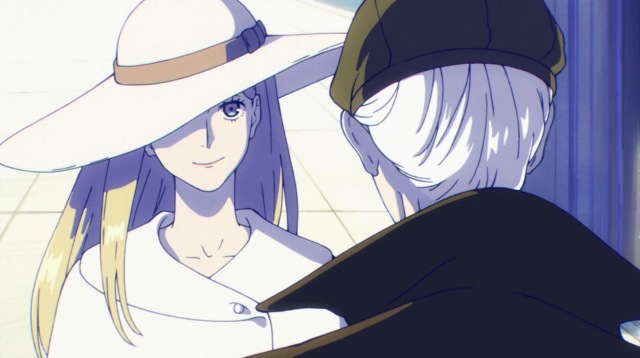 Like previous episode of ACCA: 13-Territory Inspection Department (ACCA: 13-ku Kansatsu-ka), this one picks up right where the last left off, but it does so in much more depth than you might have expected.

Nino has some explaining to do for Jean regarding the royal reveal from last week, and thankfully, we get to watch his exposition rather than sit through their stationary conversation.

ACCA pulls us 33 years into its past with a washed out colour palette contrasts with its standard temperature. This visible change in each scene of the lengthy flash back combines with skillfully regressed character designs to ensure nothing feels out of place compared to the show’s present.

Nothing feels out of place compared to ACCA’s present

ACCA eases us into answers to questions I didn’t even know I had, like what’s the name of the Privy Council president? It’s Qualm, he suggests to the King that his daughter, Schnee, be removed from the royal family when she erupts with uppity political motivations after studying in Kororē — a district renowned in the present for raising independent women leaders like General Mauve.

Schnee doesn’t seem like one to be pulled along by the council’s puppet strings, but ACCA does a great job of demonstrating the circumstances of her disappearance. The princess was complicit in her vanishing act. “For the good of the kingdom,” she says to her dad, practically parroting back the words of Qualm. This scene sees Schnee fluidly prancing around the King as she assents to the conspiracy.

Her vocal performance is impressive here, given that the actor, Aoi Yuuki, also voices her daughter. Yuuki is often cast for regal roles, but usually ones for younger characters (Victorique de Blois in Gosick, Alice Blanche in Ikoku Meiro no Croisée, Krul Tepes in Seraph of the End).

She’s shown an excellent a mature range before (Noël Kannagi in Sora no Woto, and several supporting roles in Hyouka), but to see her performances so directly juxtaposed side by side in this episode is very unique. Schnee and Lotta sound like different people separated in age by decades, yet they also sound distinctly related.

Schnee and Lotta sound like decades separat their age

Schnee’s disappearance is staged during an ocean vacation, and along with her aide, Abend and two of his servants, without leaving a trace. The ship her public believes to be her watery casket is never actually animated, but it’s fine. The plot point is important, but the specifics are better told through dialogue here to keep the exposition moving. A wig here, a long brimmed hat there, and Schnee flies the coop to Badōn.

And that’s where Nino comes in as the glorious main focus of this episode. One of Abend’s servants was Jean’s future best friend, the other was his father. While not as impressive as Yuuki’s work, Kenjirou Tsuda does a good job voicing the difference between 15-year-old Nino, and his present day, mid-40s counterpart.

Ready to step out into the world as soon as Schnee is in the clear in Badōn, she lays out some coldly direct rules for a clean departure with Abend. However, the man who gave up everything to take her to safety doesn’t listen. He shifts into the shadows and supports her life with invisible acts and constant surveillance from Nino and his dad.

Jean and Nino’s high school meeting was never fated. It was determined. Nino’s observation of the clueless successor to the throne began even before he was born. ACCA does a great job of speeding us through the years as Jean and Lotta grow up with a vocal insert song backing Nino’s benign espionage with a camera gifted to him by his dad.

And the story telling during this insert is really great. “A red bird sings/ it says the time is now,” the lyrics go. “Everything will be all right/ even lonely nights are preludes to an eventual dawn.” Each of the lines are as hopeful as the princess’ new family and Nino’s happy supportive work for his dad. The vignettes are happily punctuated by Nino’s magic tricks and Jean’s early food obsession.

The great atmosphere built up over the last several minutes falls out form the ground of the scene suddenly; Nino’s father also died in the train accident that killed Jean and Lotta’s parents. Nino is left silhouetted by only the light of the TV reverberating the news of their death through his apartment, and you could easily see this as the next chapter abruptly started in his life.

It’s a chilling climax to the episode, earned through the relatable exposition it weaves through the flashback. And it leaves us with the next next story thread, as Abend coldly relays instructions to Nino over the phone.

When we’re first introduced to Abend, a breathy, out-of-tune wind instrument wheezes through the air like a door creaking on a windy night. It’s as if to make us sympathetic to vanishing ploy he’s been enlisted into, while still putting us on edge about his inner conflict about resigning his life to servitude and insignificance. 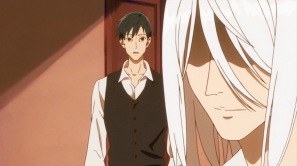 This episode was a well-paced and interesting look back at what brought Jean and Nino together, and more importantly, what kind of claim the cigarette peddler has to the thrown, but like each great ACCA episode before it, it also leaves us with several questions.

Unusually, cigarettes are not even hinted at in this episode, a first for the anime. ACCA also never fully reveals Abend’s eyes or facial features, shrouding him in mystery.

We know Nino’s reported to him from the day his dad died, but with Abend’s shadowy presence introduced as a key player in ACCA’s world, this episode demands us ask, “What does he want?”