Several questions stand unanswered as Demi-chan wa Kataritai (Interviews with Monster Girls) comes to a fan service-filled close, but thankfully the anime goes out with much of the comedic charm and wonder it started with.

Observed in isolation, you might think Takahashi’s vampire nightmare during a cold-sweat nap could be a sign of a dramatic lurch for the final episode. Instead, he wakes up to a considerate Hikari throwing a blanket on him, and delivers a final demi-human lecture.

The miniature hikari (light) photons bouncing around a diagram of an eye as he explains why nocturnal creatures’ eye glow when photographed is a cute touch that sets the tone for the rest of the episode. There are no grand revelations here, and no reintroductions of the lingering dramatic plot points. We never learn more about Kurtz’ anti-succubus nature or purpose, and Himari’s emotional influence on her sister remains unexplored.

There are no grand revelations in Demi-chan here

However, watching Takahashi get played by Hikari’s ever-bubbly personality moves the episode forward without leaving a bitter feeling about what isn’t discussed. It’s worth crediting her Japanese voice actor again. Kaede Hondo’s delivery feels perfect for Hikari’s character. Enthusiastic, yet nuanced with mean streaks and reflective moments, Hikari’s antics would have easily fallen apart with out this superb casting choice. The rest of the anime might have been soon to follow as well, were it not for the smile that the blonde vampire put on my face whenever she was in a scene. 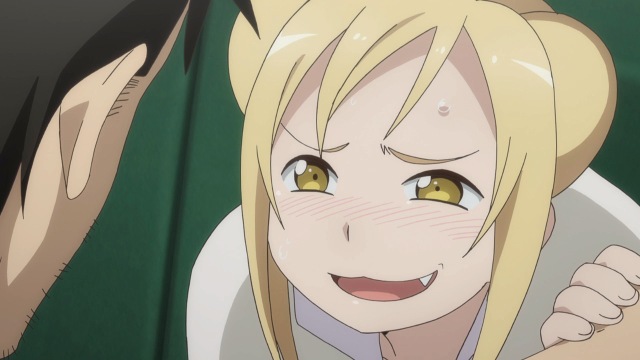 Similarly, Yoko Hikasa’s vocal performance as Satou has often been a source of joy, and this episode is no different. As the four demis, Takahashi, and the two bathroom-bullies turned friends lounge about at the school pool, Satou’s feeble attempts at flirting buoy the scene. Although, that’s more an effect of the strong scenario and character writing, and the comedic timing of the animation than Hikasa’s acting here.

Days after her hasty video-invitation to Takahashi to go drinking, Satou’s still nervously obsessing over her attempt at romance to a bewildered Ugaki on the phone in the middle of the night.

As someone who doesn’t drink much, I can relate to her misgivings about knowing what to order at a bar, but her goofy worries about relaxing her aphrodisiac powers while inebriated are what really make the sequence interesting.

From her hoarsely out-of-breath stride up to Takahashi in the hallway, anticipating his reaction to her invitation, to her gasping scream when she thinks he’s asking her out, the relatable aspects of the novel character quirks has always been this show’s strength.

That said, Yuki feels pretty left out of the episode, but not offensively so. She’s present, and she gets a few effective callbacks to her previous exposition — a chuckle at a bad pun here, a reference to her emotional growth there — but she’s not the focus in the finale.

Unique moments are one of the best parts of Demi-chan

In a slightly dubious but mellow scenario in the back half of the pool sequence, Machi does take centre stage. Hikari coaxes her into putting her disembodied head underwater, apparently for the first time.

We get a kick out of Satou and Machi’s reaction  to Takahashi’s pro body-builder physique as he enters the water to supervise the dullahan’s dive. The submerged cut leaves an impression as an acoustic folk insert song plucks its way through the initial silence with a light, drum fill.

Demi-chan has often used cinematic elements like this to its benefit. They might not be innovative, but it moves each scenes along more effectively than if they were absent. Another notable example in this finale is the ducking noise of the cicadas when Satou mumbles out a partial romantic confession at the pool, and then again when she flashes Takahashi her swimsuit.

As the entire cast splashes around in freeze-frames of 3D animated water while rainbows crack the sky, it’s hard not to smile along with the music. It’s sappy and it’s fan service, but it feels like a sufficient conclusion for the cast.

It was also nice to hear a direct response from Takahashi about what he’d do if one of his students confessed to him. “I couldn’t think of high schoolers as anything but kids,” he says to his fellow teacher Satou, while clearly missing the fact that she’s into him. Demi-chan sticks with the laughs right to the end.

Hikari closes the season on a light-hearted note

The next morning, as Hikari and Takahashi fatefully convene at the school gate where they first met in the middle of the night way back in episode one, she waxes poetic about the good times and the growth they’ve all shared. Then, it’s revealed that there’s no fate involved here. Hikari is just late, and Takahashi happens to be the teacher on duty to catch tardy students.

Her sweet talking and his experienced denial of her tricks closes the season on a light-hearted note. It’s a pleasantly funny and fitting way for this season of the anime to end, but if Demi-chan’s animated offering has to conclude here for good, it would have been nice to get some more comedy or self-contained character interaction, rather than the red herring of Kurtz existence halfway through the cour.

Demi-chan wa Kataritai (Interviews with Monster Girls) is streaming on Crunchyroll. Funimation is streaming a simuldub of the show.