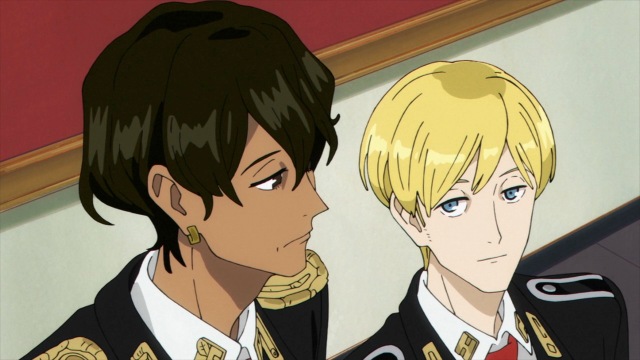 That doesn’t necessarily mean that the anime is a masterpiece. Were you to build that argument, you’d need to more heavily rely on other episodes than its finale — but damn, ACCA’s final episode sure makes it easy for one to start that debate.

I don’t usually give spoilers warnings in episode reviews, but I’m going to drop one here, because there are so many revelatory moments in ACCA’s conclusion that it would be a shame to read about them in isolation. If you want some end-story criticism that doesn’t give away everything, please read my review from last week, knowing that Jean’s plot-mobile accelerates to its top-speed in the finale.

That metaphor probably does a bit more visual justice to the episode than it deserves, though. Much of the episode consist of talking heads and static imagery, but the weight of the the characters’ words and the images on screen combine with ACCA’s consistently impressive original soundtrack to build a crescendo of meaningful moments.

The episode opens with several bleak cuts. The King lies ill on his what his dialogue makes us think will be his deathbed, and it seems he’s always known about Jean and Lotta’s true identity. Grossular continues to sulk in the ACCA headquarters courtyard, also apparently sick to his conscience about the subversive coup d’état scheme he’s complicit in. And Mauve gives Lillium the stink eye as he briefs the assembled ACCA force of the coup plans.

Her frustrated look doesn’t phase him, though. With the sickeningly macabre grin that freezes on his face, it’s hard to imagine anything shaking him. If for some inexplicable reason it wasn’t clear that Lillium is this show’s supreme antagonist, you know after this cut. For an episode that can be rightfully docked for it’s lack of animation, the artistry in the depiction of it’s stationary talking characters definitely picks up the slack.

Everything seems to be going perfectly for the coup after all this setup, both by the characters and by the narrative work done at the start of this episode.

Even prince Schwann’s frustrated attitude towards ACCA plays right into their hands. “There was no need to arrange theatrics for ACCA,” apparently, as he brings a retinue of just 15 private guards to his inauguration. That works out just fine with the pacing of this episode, because ACCA arranged the theatrics for him.

We get our first hint that those theatrics won’t go according Lillium’s plan though, as Nino — who’s made almost a full recovery — continues to liaise with Abend on the phone. “I’m just not that worried,” Nino says. As we get a flashback to the back-half of his hospital room conversation from last episode, we glean some more depth from Jean’s anger. While the secret royal wants Nino to stop living for his sake, he also wants him to know that’s he’s having fun living his volatile life.

Jean takes a long drag on a cigarette, and nods to Lillium that he’s ready to start the fateful inauguration ceremony

Back in the present, Jean takes a long drag from a cigarette, nods to Lillium that he’s ready to start the fateful ceremony, and then the exquisite brass-tacks bass line from last week kicks in again. Finger-snaps punctuate every other beat, and we see a super wide shot with the blurry heads of a crowd to establish just how many civilians are here for the event.

Nobody looks happy to see Schwann stride onto the stage, underneath gigantic ACCA and royal Dōwā banners. All the staff wear sunken faces that are steeled, as if ready to initiate the coup at any moment. Again, none of these images move fluidly, but they’re framed in such away that each cut is significant to building the tension.

This is especially the case with the lines of formally uniformed ACCA officers from each district. Seeing them in a military file instantly evokes each of the cultural peculiarities that the anime taught us about the 13 districts throughout its season. And as several tableaus of the ceremony’s proceedings flow across the screen, the same bass line pulses underneath, building to a head before cutting out when the guns are drawn and trained on the prince.

The giant twist: Jean doesn’t speak up to claim the throne he rightly owns. Instead, Mauve steps forward — Lillium’s eyes immediately perk up at the deviation from his script — and she explains that the pseudo-coup was a both a warning about his lax security and a show of solidarity towards Schwan.

“Rulers who favour shows of power will not bring peace to the nation,” she tells him, smoothly speaking with the authoritative force of a respected leader.

There’s no robust cut of the audience celebrating here, or selections of the ACCA officers jumping for joy, which is definitely odd. The lack of reaction is jarring in the face of the momentous happenings on stage, but ACCA powers through.

‘Rulers who favour shows of power will not bring peace to the nation,’ Mauve tells Schwan

The show’s use of shadows throughout the entire inauguration scene plays with the emotional state of its characters. Most of the cast is shaded while Lillium’s quiet grin is in the light, but this is inverted when he realizes that his district was the only one left out of the real loop when he thought he was spearheading a coup.

When pressed for answers, Jean launches into a wordy but clear denouement with flashes of key images from previous episodes, accompanied by upbeat jazzy horn shots in the background. He explains from exactly what moment he’d been turning Lillium’s game against him (all the way back when he first heard about his royal blood), and he leaves the Furawau leader with a loaded question: what will you do next?

Lillium walks, taking his district with him now that he’s lost any hope of leveraging their resource-wealth to control the entire kingdom with Jean as a puppet. It’s super satisfying. Jean’s royal ties are hidden from the public, and peace is preserved between the 12 remaining districts. More than that, a Nino-narration shows us the improvements that come from ACCA’s restructuring now that the organization doesn’t have to fear abolition.

In a smoothly flowing montage, first framed as a media profile that interviews where the chief officers and ACCA staff wind up, then as a set of intimate discussions between new friends, we learn the details of the all-together happy ending of the show’s cast.

Every time I catch myself starting to think “but what about…” an explicitly clear cut from these final minutes rushes into my brain to appease my doubts. What about Abend? His seeming absence is perfectly explained with an air-tight reveal as he formally relieves Nino of his duties.

The only lingering moment of melancholy in ACCA’s ending comes as Jean respectfully acknowledges his unrequited love for Mauve. She’s too strong and busy of a woman to spare time for a quiet love life. It’s ironic, because personalities like hers and Grossular’s are what inspired Jean to join ACCA in the first place.

The peaceful status quo continues on as a special ending song with soft, pop-y female vocals plays underneath stills referencing Jean and Nino’s past. And as the pair share a drink and Jean lights a cigarette, it’s hard to imagine a better conclusion to the tale of the Jean the tobacco peddler.