When I first purchased my iPhone 4S in 2011, I did what any deprived mobile gamer would do after getting a shiny piece of hardware they’ve drooled over for years: I downloaded every free app and game that caught my eye.

Yet, out of the hundreds of free-to-play stinkers, and even the pay-to-play gems that I sunk hours into before completing their self contained experiences and removing them from my phone to free up space, Jetpack Joyride is the only 20 mb bundle of digital joy that has stood the test of time and remained on my iOS device. 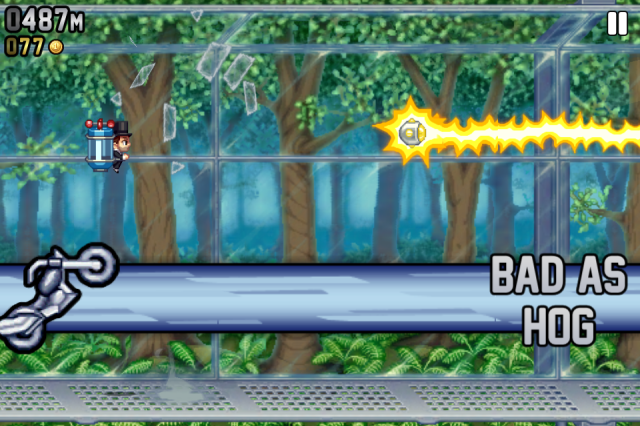 When I look back now on the scores of endless runners that Halfbrick’ Studio’s iOS juggernaut no doubt inspired (although I’m sure that Temple Run had a hand in things as well), it’s easy to see just how fantastic Jetpack Joyride really is. However, If you’re looking for anything that comes close to matching its quality and enjoyment in recent memory, the only standout would be Punch Quest, RocketCat Games’ progression-centred endless runner. Yet, for ever complicated reason Punch Quest is successful, Jetpack Joyride remains golden in its simplicity.

With its singular and simple input method that’s made interesting thanks to the playfully animated jetpacks that unlock over a reasonable amount of time, I rarely get bored of quickly launching the app and trying for a quick high score or a swift unlock of one of the Jetpack Joyride’s varied and rewarding challenges. And all of it can be done with a few measured taps of the touch screen with one finger or thumb.

If I had to compare the expertly paced rewards and challenge system to another game, the Call of Duty: Modern Warfare comparison would seem logical, but with the two games differing so greatly in almost every other way, that’s where the comparison starts and ends. One game uses the system to help you gain an edge on your online-multiplayer opponents on a gamepad, while the other uses the rewards and challenges to help you gain an edge on your own reflexes and a touchscreen. But more importantly Jetpack Joyride just encourages you to have fun, no matter how far you travel. 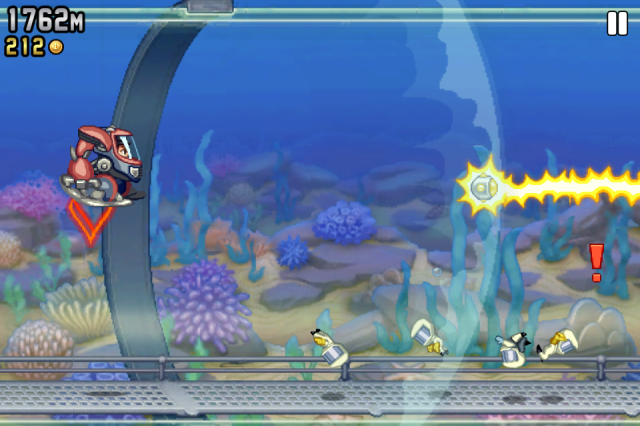 It’s definitely worth noting that over the past couple of years I haven’t plunked a single cent of real-world money into the game’s coin economy, and not a moment of my enjoyment has been diminished because if it. If you really enjoy the way one jetpack looks, or you feel like giving one of the game’s crazy vehicles an aesthetic upgrade without saving up the in-game coins the long way, the in-app purchase rates listed for the coin bundles strike me as very reasonable in relation to similar, paid iOS games.

If you’re looking for a free, pick-up and play, time waster for your iOS device, and you’ve somehow manage to thumb your phone’s screen without hearing about Jetpack Joyride, rectify the situation and go download it from the iTunes App Store.

2 comments on “Jetpack Joyride: the juggernaut of pick-up and play iOS games”