Miss Kobayashi’s Dragon Maid (Kobayashi-san Chi no Maid Dragon) dodges its way into my heart this week as Kobayashi preps Kanna for school. It also ducks, dips, dives, and dodges its way through some great comedy and animation in the second half.

I’m thrilled to see well-adjusted adult female lead Kobayashi shown off again this week. She has her life together in a way that deviates from the one-dimensional or bumbling archetype that similar characters tend to fall into. As bizarre as her surroundings are, Kobayashi is a character that was mature enough to have a family before this show even started, so she takes things in stride.

Our enjoyment comes from watching the cultural differences and slight growing pains of domesticating a dragon who loves her, and one who just wants to eat tasty things before she naps — and maybe goes to school, too.

So the scenario turns into a light-hearted family jaunt to different stationary stores, and the episode quickly becomes the “look at Kanna’s adorable happy face show.” I don’t think I can call a stapler anything but a “dragon’s mouth” ever again.

Kanna’s eyes are always crimped by her thick horizontal lashes and long bangs, making her face droop no matter how awestruck or excited she is. The cute contrast is a big part of her appeal. She’s a character who’s comedic and heartwarming value is mostly determined simply by existing on screen with her visual design.

These aspects of her character are exaggerated by the constant sparkles twinkling around her head during the whole shopping trip. Watching her and Tohru mess around with geometry sets, pudding-shaped erasers and multicoloured pens is quaintly funny, and reminiscent of an everyday family out and about together.

They all hold hands while walking, and Kanna’s cat-like curiosity prowls the isles of every store. Her child-like adoration of new things plastered a smile on my face.When Kanna wears her new backpack all day and even goes to bed with it, it struck an especially personal chord with me. Where I’m from, there’s a common anecdote of young Canadian kids falling asleep wearing their new hockey gloves. I did exactly that several times growing up, and I see myself in Kanna.

The whole sequence stands alone as a modern-day family exposé rather than a surreal comedic experience, and it culminates with a bit of consideration Kanna shows to Kobayashi by putting back an unneeded keychain to keep the shopping bill down.  Maid Dragon follows up on it later in the episode, just like nearly every aspect of its story so far.

Tohru can cast invisibility? We see it in several subsequent sketches in the following episodes. Kanna thinks seesaws are for sub-stratospheric propulsion? She confuses her new friends with her description at school.

And as enjoyable as it is to take in Kobayashi’s maturity and Kanna’s innocence, Kanna’s oddly self-aware classmates are equally as entertaining here.

The shiny-headed Classroom Queen, Riko Saikawa, talks a big game, but all the students see right through her. The subversion of expectations makes for some good laughs, and Riko’s in on the joke too. Upset from being upstaged by the newly transferred student, she delivers her frustrations in a perfect summary of Kanna’s existence: “You’re so cute. It ticks me off, and I want to hug you.”

There are still a few other supporting characters from the opening and ending themes that haven’t been introduced, but I can’t see that being a problem. This episode shows that Maid Dragon can succinctly reference its own jokes tied to characters to subtly maintain a logical sense of unity between episodes.

It doesn’t feel like anyone from last week’s episode is meaningfully left out, either. We don’t see Tohru’s otaku coworker Makoto until the preview for next week, but all the dragons are surprisingly accounted for in a second-half sketch full of allusions, and superbly animated dodgeball. 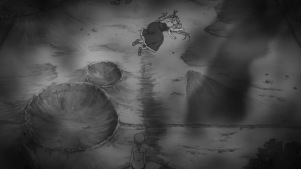 The half opens abruptly with a grainy film noir picture of smouldering trenches dug in the sand of a playground and the entire cast of humanoid dragons battered, bruised and unconscious on the ground. Kobayashi’s dour voice-over instantly shifts the mood to the new scenario.

Riko brazenly picks a fight with some older kids over playground turf rights, and she enlists Kanna’s family to help her in a deciding dodgeball fight. The setup is funny, hanging on Riko’s obstinate facade, but after the older kids are non-lethally dispatched and sent hobbling away like a mob of defeated Looney Toons villains, the scenario erupts into an excuse for Kyoto Animation to show off its chops again.

Dust clouds part as super sonic balls are hurled, the earth splits, and the dodgeball spins through the heat-map colour spectrum as in deals with absurd levels of friction.

Along with the visuals, the sound design here is great. Even the shortest animated cuts are given extra weight, like when Kanna darts in front of Riko to intercept an errant ball and the soundscape swells with bass chords that give Kanna’s quick movements power.

The whole sequence wraps with a receding Ken Burns shot putting a stylistic cap on the sketch, as Kobayashi narrates us out. The mixture of warm fuzzies, animation and laughs is exactly what I’ve come to expect from Dragon Maid, one of the anime serving as a highlight of my week this season.