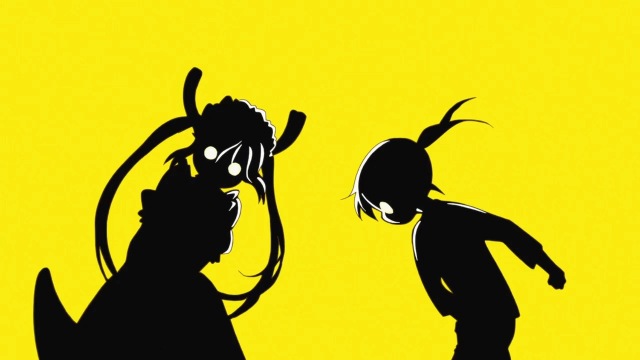 The first half of this episode is Maid Dragon meets Food Wars!, and while the premise of Tohru and Kobayashi fighting over who can make the best bento for Kanna may seem a little tame, the comedic timing is as strong as ever here. It makes the protracted punchline land and segue cleanly into the next sequence thanks to efficient writing and clear visuals cues. 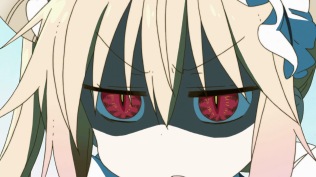 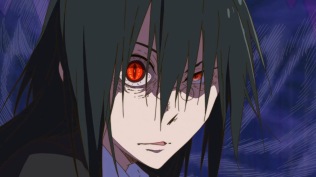 What’s more, Maid Dragon spices things up with several focussed shots that show the expressively vengeful nature of the dragons’ eyes in more detail than ever before. Lucoa’s ever-changing irises are still the standout, but the death stares from Fafnir and Tohru are captivating as well.

The vengeful nature of the dragons’ eyes is captivating

Despite the evil energy their eyes project, Maid Dragon still does an excellent job of furthering the relationship of its main couple. The fact that a dragon capable of world destruction and a human salarywoman are fighting in the first place is odd. As Lucoa puts it, “this fight only happened because you’ve grown so close to each other.” So when the show’s new dragon, Elma, finally enters the fray, it’s no surprise that Maid Dragon uses her to keep the focus squarely on its established couple.

Yes, despite Elma’s explosive entrance through Kobayashi’s apartment wall — the most brazen of all the dragons so far — Maid Dragon uses her primarily to stoke Tohru’s jealousy.

Elma’s unicorn-anglerfish appearance comes from a clan of harmonious, law-abiding dragons in conflict with the chaotic faction that Tohru was born from, so they don’t get along. However, Elma’s stomach — and much like the other dragons, her immediate desire for a place to live in Kobayashi’s world — gets in the way of her ambitions to bring Tohru home.

Elma’s thinking aspires to be logical in everything that doesn’t involve her tastebuds, so her swift infiltration of Kobayahi’s workplace, despite initially not knowing how to turn on a computer, is believable. Kobayashi’s kind professional nature is reinforced here as she helps Elma adjust. It’s not unlike the selfless behaviour she displayed that last time we saw her programming office through the eyes of the invisible Tohru in episode five.

Elma drives Tohru seething up a wall with jealousy

The working-hours proximity that Elma shares with Kobayashi drives Tohru seething up a wall until she snaps in a familiarly well-animated breath of fire. The outburst is controlled though, much like most of Tohru’s personality since she’s adjusted to living with her new partner. This time, she doesn’t even blow the door entirely off its hinges, and she immediately turns to conversation with Kobayashi once Elma is temporarily out of the picture.

She’s self-aware of her selfish blemishes, and she clearly explains her desires to Kobayashi in the warm and endearing way that’s made this show shine all season. And rather than the blind reciprocation that often feels shallow in other fictional romances, Kobayashi articulates her feelings with appreciative nuance.

“I’m not used to being wanted,” she says.

‘I’m not used to being wanted,’ Kobayashi tells Tohru

The episode in its entirety isn’t the strongest one we’ve seen from Maid Dragon, but it handles the late introduction of the last main supporting cast member in a humorous and very satisfying way.

This episode still leaves the the door open for the same growth potential Maid Dragon has teased throughout the season, and since it’s delivered on that potential week after week, I’m looking forward to enjoying the future shenanigans that this anime so effortlessly throws its cast into.