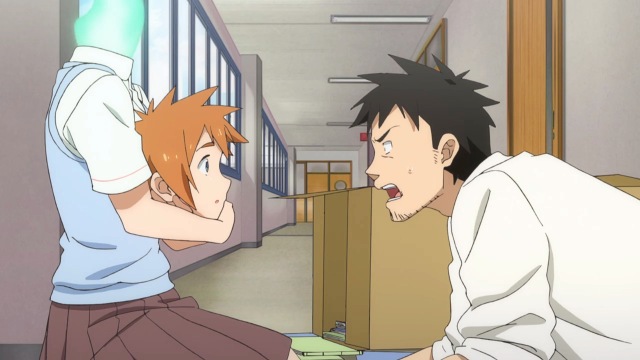 This week’s Demi-chan wa Kataritai (Interviews with Monster Girls) is a welcome return to the more contemplative form that the show displayed before its recent slog.

A huge part of this success is a return to Machi as the focal character. The reason is simple: The strengths of the visual medium lend themselves most strongly to the character with the most bizarre design.

Between an energetic blonde teen who bites things, a demure manga lover that sweats ice, and a young adult who wears a jersey to avoid male attraction, the headless ginger is easily the most eye-catching. Demi-chan leans into that quirk when it focusses its scenarios on Machi, and this week’s episode excels because of its dependence on her entire character.

Details like Machi’s head glued to a soap opera while her body walks around to help her mom builds the premise of the episode while simultaneously giving us something interesting to watch.

The resulting conflict born from Takahashi’s urge to protect, and Machi’s desire for a traditional kiss (by holding her head above her shoulders) creates a scenario where it’s easy to see where both characters are coming from. Their subsequent reactions feel genuine, too.

The headless ginger is easily the most eye-catching

Machi cradling her head that’s facing into her chest while sulking isn’t something any other character can do, and when her friends come to talk things through and cheer her up with the same consolation tactic, it builds on the concept.

With subtitles off and the audio muted, you’d still understand the emotion in this scene. Thankfully, the dialogue is effectively written and delivered as well, leaving us with a better understanding about how the characters see their actions within Demi-chan’s world. 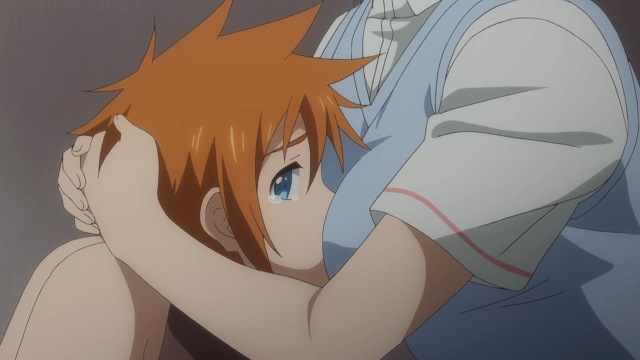 The familiar smooth transitions return this week. Machi wants to make up for worrying her teacher, so after consulting with her pals, she goes to visit Takahashi so he can study more about her dullahan body. Whether Demi-chan is transitioning between good content or mundane, it always does so in a way that makes narrative sense.

Although, a lot of those transition have usually kept us inside the high school campus, so when Takahashi totes Machi to another university to visit one of his old classmates, it’s a refreshing change of pace. It helps when that new character’s oddball nature can compete with Machi’s visual draw, too.

“I guess unusual people are unusual, whether there demis or not,” Machi surmises as she watches Takahashi’s friend Souma, a prodigious physics researcher, locked in a meditative state.

Souma might well be a computer science genius as well — either that or a PowerPoint guru. As he talks through the physical wonders of a dullahan’s neck, we see several digitized full-screen representations of wormholes, nerve systems, and swallowed-whole steamed buns.

The visual punchline here is that each of these cutaways are actually playing on Souma’s laptop. The man either prepped them before Takahashi and his student arrived, or coded them in real time. In either case, this sequence effectively paints him as a welcome eccentric addition to the supporting cast.

Souma might well be a computer science genius as well

The scientist makes a good argument too, purporting that the wonder of a dullahan represents the “potential of physics.” “Does it not give you a sense of the necessity of humans in the universe?” he declares. It takes him a while to get there, but it’s a lot of fun watching him convince Machi, step by step, that there’s a “physical significance of human intention.”

Machi wraps a nice bow on the sequence with some final musings on epistemology and how she might change the world in her future. The entire episode follows a pleasant arc that, although not strong enough to rectify the boredom of previous episodes, leaves a warm feeling behind when its done.

Tied into a few cuts in the first half is also the introduction of what could be a key character. The vice principal, wearing a black suit and tie, strikes quite the boogeyman figure as he leers after Takahashi, and what little dialogue we do get from him, suggests that he’s concerned about the proximity Takahashi keeps to his students.

It’s an underlying tension that exists throughout the entire show, and if Demi-chan can effectively use it as part of its final narrative conflict, I would be impressed, having assumed it was going to be swept under the rug in favour of light-hearted comical presentations.

I mean, this episode only ever gets rolling because Demi-chan’s 15-year-olds girls  want to kiss their adult teacher. With the right framing, taboos like that can be dismissed in fiction, but I think it’ll be more interesting to see it tackled head-on.

Demi-chan wa Kataritai (Interviews with Monster Girls) is streaming on Crunchyroll. Funimation is streaming a simuldub of the show.