ACCA: 13-Territory Inspection Department (ACCA: 13-ku Kansatsu-ka) doesn’t quite put the pedal to the metal of the plot-mobile this week, but boy does it ever remind us how smooth its transmission is, helmed by Jean.

The idyllic atmosphere of Furawau is downright decadent. It’s just as royal as the capital Dōwa district, if not more so, and like this anime has done before, clear visuals and choice bits of dialogue tip us off to the nature of this districts residents. They’re a smarmy lot of wealthy citizens, awash in an abundance of oil resources. Their curated smiles paint a happy picture, but one that’s also filled with danger and suppressed anger over supplying 90 per cent of the Kingdom’s fuel.

“It’s more of a show of bravado than cheer,” Jean observes.

The danger makes its way to our favourite ACCA auditor

And as was foretold last week, that danger makes its way to our favourite auditor. Thankfully, it does so with a far more interesting delivery than the non-action of recent episodes. 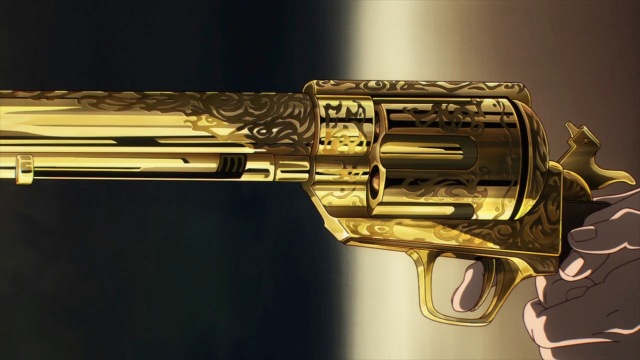 Dōwa agents are after his life, and they’re instructed to get the job done or die trying. Unlike in the pithy escort mission they attempted with Lotta, Jean’s pursuers are packing an engraved golden revolver, fit for a royal execution. This is the kind of stylization expected of ACCA. The mere sight of the weapon plants connotations into the scene, especially when firearms have played a negligible role as we’ve toured the Kingdom in this show. In a peaceful continent where one district sports 10-character license plates while another relies on horse-drawn carriages, ACCA didn’t need to use murderous weaponry to show us its world. It often relies on subtly, tact and movement from the shadows.

This is the stylization that we expect of ACCA’s drama

Nino reappears from those shadows this week disguised in the local garb, and as the Dōwa agents take aim at Jean, he preemptively leaps into the bullets’ path, winding up in critical condition.

“I can’t tell if you’re getting dragged into things, or your prying into the whole mess,” Nino says, wheezing to Jean from his hospital bed. And in what can be seen as the first solid step towards the anime’s climax, Jean applies some pressure to the pedal with his foot. If the flashback episodes were his vehicle idling, and his final audits saw him coasting in first gear, in this scene he finally shifts the narrative machine into second.

Jean gets mad, practically spitting his words at Nino. “You don’t exist to serve the Dōwa family. Neither Lotta nor I want that.” It’s the most emotion we’ve ever heard from his voice. His hair shrouds his eyes as he delivers the line, and as he strides back to Furawau’s leaders to accept their coup proposal, the air about him changes. He moves with a steely conviction.

Jean receives the most flamboyant cigarette to date from Furawau, the last of 13 that he’s collected from each district. The pink colour of its paper is hot, and so is the reveal of the gifted cigarettes’ significance. Lillium unravels just how deep his ties run when he tells Jean he “spread word that intent to join the coup would be indicated by handing a cigarette to the heir.” From the first episode, every district leader has been privy to this key detail that Jean (and ACCA’s audience) could only guess at.

It’s very clear that we should be worrying about Lillium

Lillium, through Furawau, is leading the coup. He’s just using our lost prince protagonist as a figurehead, and when he assures Jean that “he needn’t worry” a second time in the same scene, the truth within his eyes is masked out of frame. It’s very clear that we should worry.

We catch a glimpse of Mauve doing just that, waiting in the appointed bakery, not quite forlorn, but reticent about how to take Jean’s no-shows at their rendezvous spot. When word of the coup formally reaches her office and she calls Jean in to consult, it strikes a curt end to their professional rapport, and signals another plot shift into third gear. Jean’s cold salute to her is followed by the funkiest bass line I’ve heard in an anime in years. The accompanying finger-snaps set a groove with such force that it’s impossible to miss the characters getting down to brass tacks.

Jean touches base with several familiar faces on his way out of Mauve’s office, and its’ nice to see all the ACCA branch supervisors reunited. Each one received the briefest of on-screen text introductions throughout the season, and some shared illuminating heart-to-hearts with Jean about ACCA’s significance. It’s fitting that they’re around when things really start accelerating. Their romantic gossip helps set the light tone of how most of ACCA feels about the imminent coup attempt, unanimously sanctioned by the districts. Those closest to the dealings aren’t so calm, however.

“Just tell it like it is,” Grossular says, his regret apparent as he clenches his fist at Lillium’s half-admission that the coup is for the sole benefit of his family. Grossular saw this coming in the burgeoning way we all did over the last few episodes, but his physical manner and dead eyes harken back to the time he first consoled Jean for the loss of his parents.

A light piano line plinks over the warble of digital bass synths, and far-off cymbals seemingly rattle in a sewer. It’s chilling. Mauve catches Grossular after his frank talk with Lillium, and her firm inquiry as to whether he’s ok is met with a lifeless affirmative. Even if he says he’s ok now, someone in ACCA — maybe many someones — are not going to be ‘ok’ in the immediate future.

The mysterious Abend was a no-show again this episode — unless you count the permission he must have granted Nino to tail Jean — and with the coup coming to a head, it’s hard to imagine him staying hidden much longer. It’s as if the whole while he’s been cruising ahead of the plot, keeping an eye on things from his rear-view mirror. Well, Jean is finally catching up, and the race to ACCA’s end sure looks like it’ll be a good one.