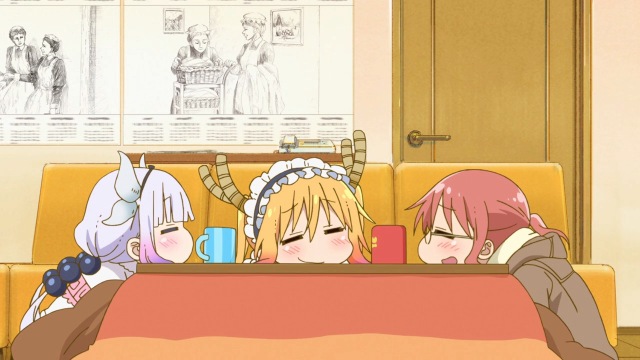 Miss Kobayashi’s Dragon Maid (Kobayashi-san Chi no Maid Dragon) keeps with the holiday theme this week, quietly revealing another cute side to its characters’ progression.

We get another taste of Tohru’s adjustment to the cultural rituals of this world. That includes the travel brochure activities like pounding mochi and exchanging new year gifts, but also the more casually revered kotatsu.

Where in the West we might build a blanket-fort to stay warm indoors, the convenient allure of the kotatsu — a short, heated table with a blanket for a skirt — takes a tenacious hold of Kobayashi’s home.

Like a transcontinental version of cozy Danish hygge sensibilities, the kotatsu Tohru wins from a shopping district lottery is a pure centrepiece of comfort. Watching the women’s puffy cheeks rest on the table, as they gorge themselves with mandarin oranges and hot drinks paints a clear picture of relaxation 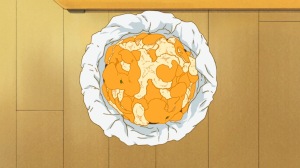 The most striking image from the furniture piece brings us in this episode is the landfill of mandarin peels in the apartment trashcan. Dated title cards and a shifting take on the subdued New Year’s TV programming combine to show how much time the trio spends wiling away their holiday.

And though it might be late December in Maid Dragon, Kobayashi has got a pinch of March madness in her lazy brain. Too reluctant to leave the kotatsu to securely put her peel in the trash, she repeatedly tries to throw a peel into the basket, stretching over from her seat to reach each errant skin when she misses.

These quiet moments of “athleticism” drive the friends around us wild when they succeed, and Maid Dragon captures that perfectly in this sequence. It’s a slightly different angle on family life than what the anime has shown us before, but it’s just as fitting as anything, because the episode branches out as well.

A short New Year’s phone call from Kobayashi’s mother reminds us how distant her relationships were before the dragons entered her life. We’ve never got the sense that she was doing poorly beforehand, but Maid Dragon succeeds in showing us just how enriched her life has become.

The show takes time to remind us of the divisions in Tohru’s mind as well. The most detailed silhouette we’ve seen of Tohru’s father strikes an imposing figure. His red cloak portrays more of a vampiric air than that of a dragon. I don’t anticipate we’ll get the chance to meet him, and that’s ok.

“Living with you is my life now,” Tohru says. The interspecies family has spent months together, and returning home would be a denial of the celebration of human life the dragons have enjoyed.

‘Living with you is my life now,’ Tohru says to Kobayashi

Elma’s character can be boiled down to “especially food-obsessed and virtuous hard worker,” but that’s all that’s necessary for the anime to briefly reference her in passing and still bring us large amounts of joy. Elma’s shopping district candy-grab was probably high point of comedy in this episode.

She furrows her brow in concentration before retrieving a softball-size wad of candy from the shopping district booth meant for children. It’s seemingly all that she lives for, and the similarly intense focuses of the other dragons draw out a warm feeling.

It’s easy to feel sympathy when Fafnir can’t sell any merchandise at Comiket, and Lucoa’s love for Shouta is bubbly — if at times a little awkward.

The lazy holiday atmosphere of this episode seems a little out of line with the rising action you’d expect from a penultimate showing, but Maid Dragon has never been about protracted narrative arcs. This episode stands alright on its own, and I wouldn’t be surprised if the finale does too.