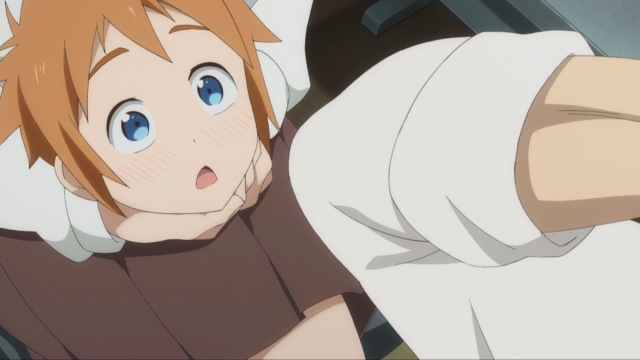 Demi-chan wa Kataritai’s (Interviews with Monster Girls) second episode brings to the fore one of the few lingering doubts I had about the premiere last week. While the warm character interactions are still there and hints for future character episodes are sown, a sketchy scenario raises some small alarms.

The episode touches on the romantic quandary of student/teacher relationships when Takahashi accepts a request from Hikari to walk around the town with Machi’s head. Hikari’s efforts are partially to mess with her friend, but also to help Machi get out of her shell. So when Machi confesses who she’d like to date after a consultation session with Takahashi, Hikari leaps at the opportunity.

Students have crushes on teachers. It’s as much a fact of the world as water evaporating when it boils. What usually happens is some intense ribbing from the student’s friends, and should the teacher find out, they feign ignorance and wait for the feelings to pass. A teacher definitely shouldn’t agree to a date with a student, no matter how well it’s framed as an “experiment” by a meddling vampire friend.

That’s how I feel about the issue, and to be clear, it wasn’t really a pressing one in this episode, especially when compared to many other taboos that anime narratives tend to break.

The walkabout town is pretty chaste by anime standards

Takahashi’s interest in the demis still feels very much like an academic one, and his first priority is one of supervision as a teacher, not fetishization. For example, when walking with Machi’s head in the sunset, he doesn’t spin around and kiss her forehead romantically. Instead, over the course of the day, he realizes that by securing her head with two hands, he can absorb the micro-impacts on her inner ear caused by walking in the same way a normal human’s neck does the job.

The only romantic feelings appear from Machi and the new teacher, Sakie. Similar to when Hikari side-eyed Takahashi’s neck in episode one. The succubus and dullahan have an odd fascination with with Takahashi’s forearms this episode.

Thankfully, Hikari’s good-natured empathetic tendencies and powers of observation are as strong as ever. While the focus of the episode is definitely the dullahan, we’re made sure to catch the vampire watching Machi as she stops to put down her hand-held regulation school bag — the only way she can properly answer her cellphone.

As the episode works its way through the experimental date, Hikari remembers seeing the inconvenience and passes a suggestion onto Takahashi. When he heads to the school principle to ask permission for Machi to use a backpack, while making pains to say the request came through her homeroom teacher, his nice-guy points are driven through the roof with the audience.

The early conflict in Demi-chan isn’t a tangible person or organization, but rather these small situational discomforts. From the shows leads, to the one-time appearance supporting cast, each character is doing their best to go through life happily and normally.

The audience deserves a explanation about Machi’s neck

In once case, that element of normalcy shattered my suspension of disbelief. In the first episode, we watched a scene where Hikari points out the facts from the fiction about vampire preconceptions, and we get a similar sequence for Machi here. But when the head of our dullahan friend slurps down a tall drink with her body several kilometres away, it seems utterly bizarre that she has to go to the bathroom.

What type of rapid genetic mutation causes a quantum teleporter to emerge in one’s neck? It’s a very small nitpick, but a distracting one in a show trying to focus on the normalcy of its characters. If Machi’s solutions for bathing and eating get screen time, I think the audience deserves a passing explanation on her neck, especially if it serves a a major plot point for the story.

Demi-chan wa Kataritai’s still super promising, and none of the issues in this episode are anywhere near egregious enough to get in the way of its strong points. It’s jokes still stick, and you still want to root for its characters.

Demi-chan wa Kataritai  is streaming on Crunchyroll. Funimation will also offer a simuldub of the show beginning on Jan. 25 at 9:30pm ET.