In Miss Kobayashi’s Dragon Maid (Kobayashi-san Chi no Maid Dragon), Tohru steps into a foreign bedchamber for a good old fashioned maid-off this week — except she’s not a real maid, so she loses horribly.

She keeps her anger in check though, not lashing out at Saikawa’s sister, Georgie, when she and Kobayashi hit it off with maid minutia. It’s a cursory-but-noticeable advancement in their relationship that has deescalated each week. Her beast-like tendencies diminish with each episode, and it’s to the point where she really holds herself back. Though, the scenario with Georgie this week really didn’t let her get a word or snarl in, even if she wanted to.

The maid wavelength that Kobayashi and Georgie resonate on is perfectly in sync as they ignore Tohru is Georgie’s bedroom. In a span of minutes, we see Tohru physically and audibly droop from the high of being dragged along by Kobayashi to a low of listening to the two women drone-on about Victorian saucers and Darjeeling tea. Tohru’s jealousy is palpable.

In the younger sister’s room, Kanna and Saikawa are syncing up pretty well, too. A distinct majority of Maid Dragon’s cast exhibits queer tendencies, and the student characters in the show are no different.

Tohru’s jealousy over the new maid is palpable

“I want something like what Kobayashi and Tohru share,” Kanna says, trying to explain her feelings while sitting on Saikawa’s lap.

“I want to be even closer to you,” Saikawa responds.

I overlooked Saikawa’s gushing adoration of Kanna’s cute nature as a platonic thing until now, but it’s difficult to think that way after their exchanges this week. Saikawa’s constant blushing and squealing at the slightest contact with the cherub-faced Kanna might have you thinking of her as just an audience surrogate, an overflow valve for our natural tendency to want to embrace cute things, but she’s that and more.

Despite the fact that Saikawa is a human, elementary school student, and Kanna is a child in dragon terms, the presentation of their relationship in this episode is romantic, at least from Saikawa’s perspective.

Kanna’s naivety comes across as her search for a soulful partnership, while Saikawa seems to be more physically attracted, bubbling the moment Kanna sits on her bed, for example. Oddly, it doesn’t feel strange at all, other than perhaps the lust Saikawa seems to over-exude, which is great for comedic effect. For the most part, their conversation feels eerily natural. It’s only eerie, because it’s not something often shown in fiction. There’s a clear expression of intent and emotion between the pair, one that should healthily be present in most relationships but isn’t — not in real life, and not in anime.

Maid Dragon doesn’t skip the same steps that other shows do, often out of narrative necessity. This slice of life is dedicated to showing its characters talking about their feelings in a productive way.

The second half of the episode touches on Lucoa, who’s now living with young human boy with a dormant mage bloodline, and it checks in with Fafnir and Takiya, too.

Lucoa doesn’t seem to fully understand her overt sex-appeal, so her roommate Shouta squirms his way into calling her a demonic-succubus. It’s another likeable pair established in the cast, and the timing is great. There are still main characters yet to be introduced, but Maid Dragon is pacing itself well. None of its cast feels underdeveloped after this episode, and it presented enough hooks before to promise us that we’d get to this point eventually. Now, it can selectively pop in on the different families to illustrate a facet of the dragons’ assimilation using characters that we already care about.

Maid Dragon closes out the episode doing just that with Fafnir. The game obsessed interloper in Takiya’s apartment is just a video game obsessed tenant now, and he pays his rent as Takiya’s private game tester and couch-vs. partner. 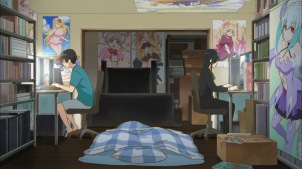 Fafnir can stay awake for abnormally long hours, and he still snaps at other humans, but he’s settled right in as Takiya’s friend, despite the murderous tendency he’s used to showing humans in his own world.

I hope that we learn more about the dragons’ history at some point in this show, but I can also see Maid Dragon keeping the past in the past and only referencing it occasionally. There’s room in the narrative balance of the show for another dragon/human pair, and that looks like what we’re headed towards.

Whether we learn more about the alternate world of the dragons’ as a narrative climax for the season or not, Maid Dragon has already accomplished enough in it’s first half-cour to merit a hearty recommendation. It’s fantasy-meets-normal cast tackles modern ideas with laugh-out-loud tact and physically affecting animation. It’s a joy, and I’m going to keep watching.