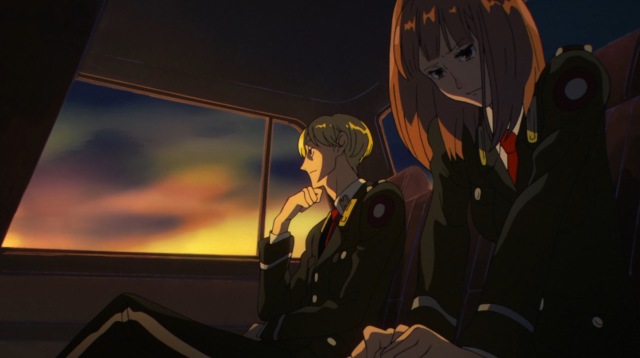 Don’t let the long name of ACCA: 13-Territory Inspection Department (ACCA: 13-ku Kansatsu-ka) dissuade you. The political drama has great writing, directing and art design all going for it.

Jean Otus is the calm and collected second-in-command in his department at the ACCA HQ, the overseer of 13 autonomous branches that manage emergency and essential civic services in their territories. But he’s just one just one of the quick-tongued and interesting characters the premiere uses to teases us.

ACCA: 13-Territory Inspection Department is bursting with natural exposition. Whenever an important piece of world building needs to be delivered, it’s through the mouth of a character on screen performing an action that’s as natural to his or her surroundings as breathing. And the diversity of the cast is remarkable. Each character design is distinct and a joy to look at, and even though several officers appear in the same military uniform, their expressions and dialogue drip with individuality.

For example, Jean’s immediate subordinates support his cool temperament by delivering some pleasant levity while being as enthusiastic about eating their cake as they are about filing reports at the precise second their due. Meanwhile, the bigger players and ACCA executives communicate their place in the hierarchy with telling salutes, nervous faces, and telegraphed fanfare. All these brilliant characters are presented in story movement that is unencumbered and well executed.

The equilibrium of the the show’s 13-territory, bird-shaped continent of a monarchy is as straightforward as it gets. Everything in the Dowa Kingdom is so peaceful that the Inspection Department — originally created a century ago as an independent supervisor to temper political tension between the territories — is now redundant. So the Chief Officers decide to axe the operation. So on the outfit’s last day of business, Jean flies out to one of Dowa’s rural territories for a scheduled audit of the police force. He discovers falsified records and uses the clues to expose the corruption of three police men turning a blind eye to illegal tobacco trade in exchange for a cut of the sales. The first rumble is small, but all is not peaceful in Dowa anymore.

With the suave manner Jean grills the rogue cop, you get the impression that he’s brimming with more detective skills than he’s ever had to flex before. and that’s a good thing, because his sudden discovery reverses the decision to dismantle the Investigation Department, and the COs instead order him to audit all 13 territories within six months — a pace eight times the normal rate.

No line feels out of place with the action on screen

In one episode, ACCA sets the frame for a cultural commentary that other shows often spin their gears for weeks trying to achieve. The dialogue is sharp and not a single line feels out of place with the action on screen. A lot of this is thanks to Jean’s smooth character lighting up a cigarette every other scene and guiding our focus with his movements in each cut, but the behaviour and reactions of the supporting cast are equally important in preventing parts of the episode from feeling like a giant info dump.

Instead, ACCA: 13-Territory Inspection Department sows the seeds of blackmail, insubordination and political unrest into the ground of every second during the premiere, earning the show my first ‘must watch’ recommendation of the season.

Work your way past the mouthful of a name, and you can find ACCA: 13-Territory Inspection Department streaming on Crunchyroll. Funimation will also debut a simuldub on Jan. 26 at 9:30 pm.