Jason Schreier of Kotaku responded to a dig from Vanillaware President and developer, George Kamitani today, and you know what, while I agree with Schreier’s stance on the sexism issue that he is trying to tackle, it really sucks that that he needed to make his initial jab at all.

Schreier first called out the artwork of the sorceress in the recent Dragon Crown’s trailer last week, due to her hyper-sexualized design. “As you can see, the sorceress was designed by a 14-year-old boy.” Schreier wrote. 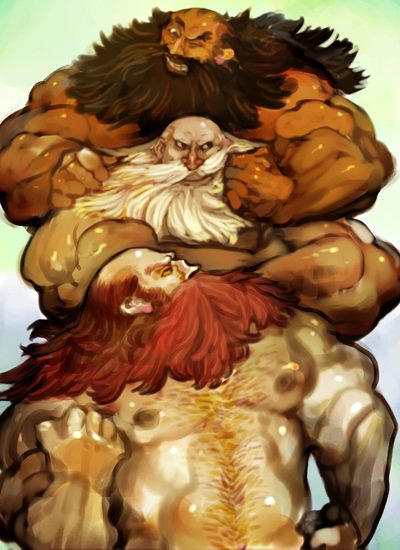 Then, this morning Kamitani responded by posting artwork on Facebook of three muscular men getting close to each other (pictured above). “It seems that Mr. Jason Schreier of Kotaku is pleased also with neither sorceress nor amazon,” he wrote in the post. “The art of the direction which he likes was prepared.”

While Kamitani later apologized for his comments, saying that – as translated for Schreier by Wired’s Chris Kohler – they were “meant to be a lighthearted joke,” the impetus for the whole altercation is quite unfortunate in my opinion.

I agree with Schreier when he wrote that “the video game industry has a sexism problem.” When you take a look at the culture surrounding videos games, it’s hard to argue otherwise, and when it comes time to critically examine video games, this huge road-block in the general discussion is really detrimental to our ability to critique work in and artistic vacuum.

I know that might sound silly but bear with me; I think that the best kind of criticism comes when you try to examine a work in as much isolation as reasonably possible. But, like Schreier, I also firmly believe that “[a]ll art has its fans. And all art deserves exposure to critics.” Though, I dream of a world where critics can assess art on a relatively flat plane.

I’d like to be able to look at stylized women and men in video games and assess them based on their artistic, physical and emotional traits without having to worry about questions like “is this woman’s appearance in the game negatively contributing to a gender gap in gamer culture?” or “are these character designs going to exclude people who possess certain world-views when they play it?”

The fact that we have to ask these questions is disappointing but with the cultural climate surrounding video games the way it is right now, there’s nothing that we can really do on the product-criticism side of things. Before we can balance the way we critique, we need to make sure that women are equally represented and included in a world that’s been dominated by men for decades.

Schreier wrote that one of the most frequent questions he was asked after his initial article in response to the trailer was, “[w]hy are you complaining about the busty females and not the burly men?” But I look forward to a time when we don’t have to complain about any sexualized gender.

Efforts such as the #1ReasonToBe panel from this year’s Game Developer’s Conference that just went up on the GDC vault are a great start, but it could be several years before we reach true equality. In the mean time, I’ll be sure to look forward to that era’s arrival, and the critical/creative freedom that it will provide.